Tour Siena
Situated in the heart of Tuscany and surrounded by the typical hill landscape of the Tuscan countryside, Siena is one of the most beautiful cities in Italy.
Piazza del Campo, the shell shaped square, is the cornerstone of this city and the place where the well-known “Palio” is run. This is one of the most thrilling events for Sienese citizens. The Palio is an historic & exciting horse race that runs twice each year in July and August.

History:
According to local legend, Siena was founded by Serius, the son of Remulus, represented in many statues together with Romolo, the founders of Rome. In Siena there are many sculptures of these two celebrated characters scattered throughout the city.
Since the Roman period Piazza del Campo has been the nucleus of the village that established a fortress here. During the “Government of Nove”, a semi-democratic group which held power between 1287 and 1355, the square was cobbled in nine sections in memory of the government and in honor of the Patron Virgin of the City.

Main Sites:
Piazza del Campo was built in 12 years and it is dominated by Palazzo Comunale with its tall Torre del Mangia. The internal courtyard of the Palace is the main access route to Museo Civico and Torre del Mangia, a place to enjoy a stunning view of the city after climbing 500 steps.
Located in Piazza del Campo is Cappella di Piazza, constructed in 1352 in thanks the Virgin for the narrow escape from the black plague that struck the city: this is the reason why the name of the fountain is Gaia. The water to reach the fountain runs underneath Siena for 30 kilometres.

The Siena Cathedral (Duomo), with its bell (1250-1313) was built in the Gothic style and is today incomplete in some parts of the building due to the scarcity of funds and plague.

You can enjoy the lunch in one of the best restaurants famous for the traditional Sienese dishes proposed in the menu. (Lunch is not included in the price). 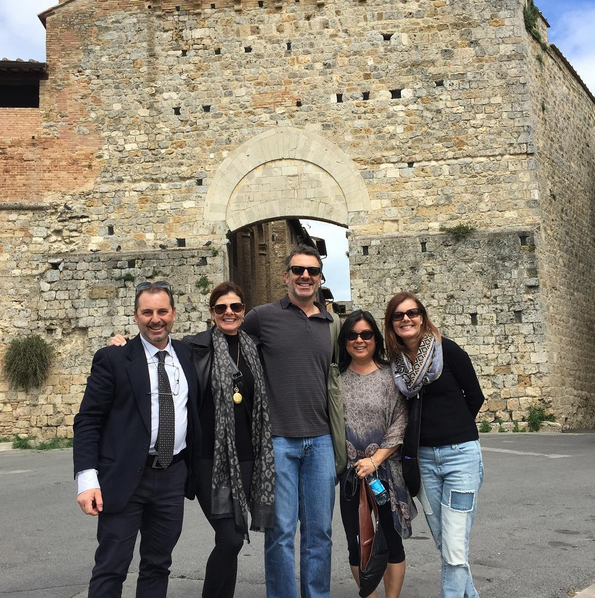 San Gimignano is a beautiful fortified city located between Florence and Siena and is famous for its architecture and its glorious medieval towers, which make the profile of this unique village.
In the most prosperous period of the village, the rich families of San Gimignano built 72 towers as a symbol of their power and wealth.
Today there are only 14 of these towers left, which contribute to a more enjoyable small town atmosphere.
Declared a World Heritage Site by UNESCO in 1990, San Gimignano is one of the small pearls of the Sienese district and offers tasty local products such as saffron and white wine famous worldwide as “Vernaccia di San Gimignano”.

Included in the excursion:
Air conditioning luxury MPV or car
Expert and English speaking driver (other languages are available on request: French and German)
The payment for local taxes, gasoline, parking and motorway fees
Travelling with us will always be a pleasure!